Civic engagement efforts connect values, purpose, and mission to your stakeholders and support business strategy. They impact the bottom line by: supporting employees, increasing brand loyalty and strengthening communities. Join us to understand what a culture of corporate civic engagement includes, and how you can bring these principles to your organization.

The Future of Conscious Capitalism After COVID 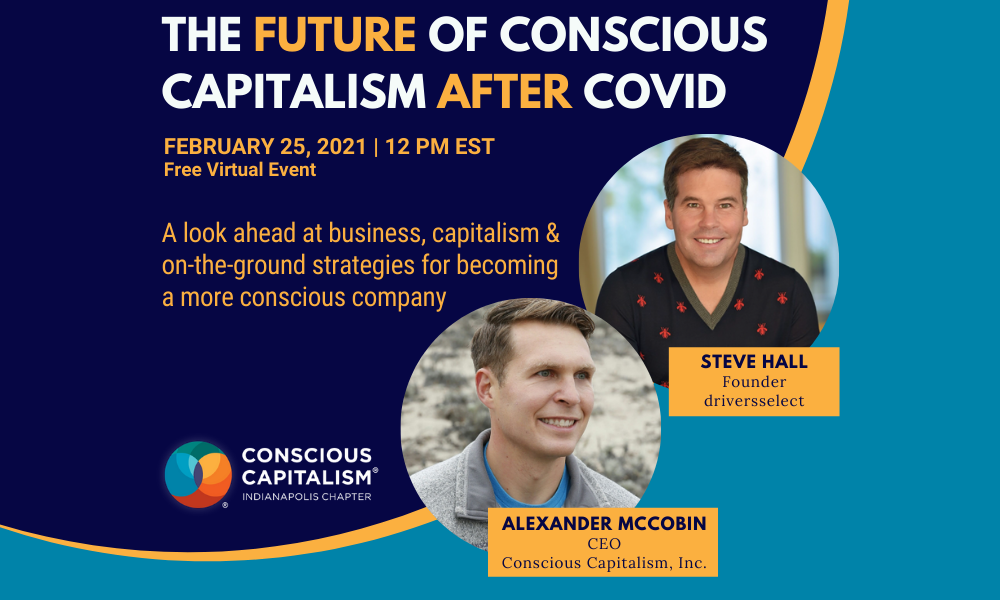 The Future of Conscious Capitalism After COVID

Ten years ago, Conscious Capitalism wasn’t taken seriously by mainstream businesses. Fast forward to one year ago and Conscious Capitalism was gaining traction with BlackRock, the Business Roundtable, and the World Economic Forum. Then COVID hit. The media called it an “acid test” for conscious business principles, predicting that companies would jettison them to survive. Instead, more businesses are joining the movement than ever before.

So, what does the future look like for Conscious Capitalism?

Join Alexander McCobin, CEO of Conscious Capitalism, Inc., and Steve Hall, founder of driversselect, for a thought-provoking discussion about what’s ahead for businesses and capitalism in a changing world. These trailblazers of the movement provide on-the-ground examples of putting the four tenants of Conscious Capitalism to work for driving business results. Plus, they offer strategies for making meaningful progress on the journey of becoming a conscious company in a time when everyone is suffering from change fatigue.

This kickoff session combines the why’s and the how’s of making Conscious Capitalism a reality in your business.

Alexander McCobin is the CEO of Conscious Capitalism, Inc., a role he has served in since 2017.

In his youth, Alexander’s entrepreneurial drive led him to start and run several businesses, both for profit and nonprofit. During college he didn’t see business as a way to change the world, he thought the way to do that was through academia. So, he began a PhD program in Philosophy at Georgetown University. As he began to work on a dissertation regarding corporate moral responsibility, he attended the first Conscious Capitalism Annual Conference in 2013, where he was inspired by business leaders dedicated to changing the world. Within a year, he left Georgetown without the PhD and dedicated himself to running one of the businesses he had started during undergrad. Before he joined CCI’s staff, he turned that organization into a multimillion-dollar operation.

Over the last two decades Steve Hall has served as a founder, CEO, and board member of automotive technology, finance, retail, and wholesale organizations ranging from startup to more than $2B in revenue. Hall is the founder and former CEO of driversselect, a national discount retailer which was sold in 2017 to the Sonic Automotive Group where he led the integration and rollout of the EchoPark business unit to over $1B in sales. The business model is based on the principles of Conscious Capitalism with a purpose of reimagining how people would experience the workplace and achieving sustainable profits well above the market through a culture focused on creating value for each stakeholder.

Today Hall serves as CEO of Generosity Ventures and works to expand the impact of The Make It Matter Foundation based in Dallas, Texas. Both organizations serve as a model for how generosity can create successful outcomes in both business and nonprofit endeavors. 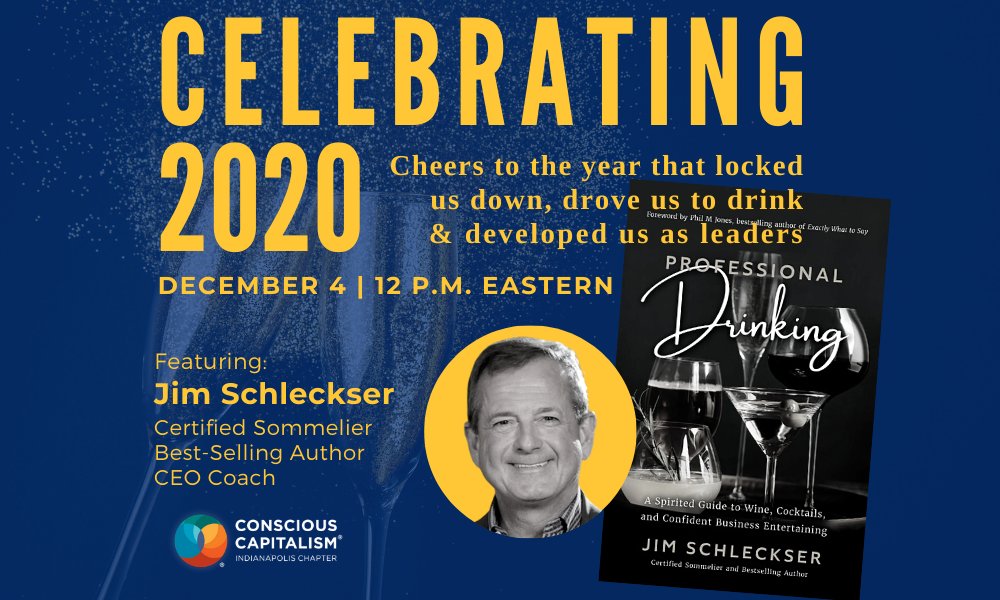 While most want to toast 2020 being over, we’d like to celebrate something different. Let’s step back and consider all the good things coming from this challenging year. With a little reflection, 2020 likely made us better people, better professionals, and better leaders ready to take on 2021.

Join Conscious Capitalism – Indianapolis for some virtual small-group networking around the high points of 2020. Then we’ll have some “spirited” fun with our special guest Jim Schleckser. Jim is a Certified Sommelier. He’ll provide some handy tips for “Professional Drinking,” the title of his fun new book—just in time for the holidays.

Jim is the author of “Great CEOs are Lazy,” detailing the behaviors that make the difference in CEO performance. He is a popular columnist on Inc.com, writing on issues affecting CEOs and entrepreneurs. His insight is sought by dozens of CEOs of growth companies around the country. Among his many talents, Jim also is a Certified Sommelier and writes on topics of relevance to professional drinkers. “Professional Drinking: A Spirited Guide to Wine, Cocktails and Confident Business Entertaining” was released in August 2020. When Jim isn’t coaching, writing, or drinking, you can find him playing soccer and climbing Kilimanjaro.

The Healing Organization with Raj Sisodia 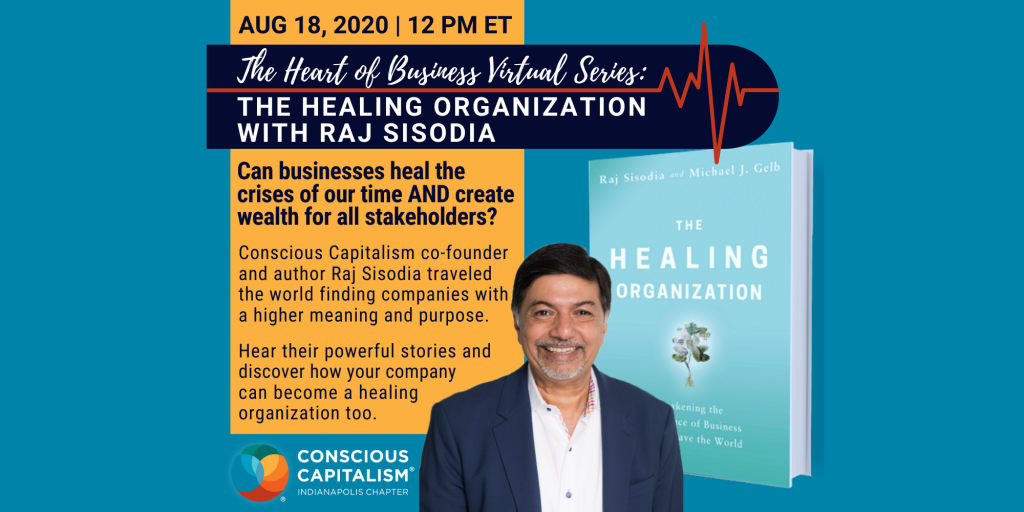 2020 has been a year of change and uncertainty loaded with challenges we never could have anticipated or imagined. Rather than focusing on the difficulties, we’re offering a different perspective: Healing. Let’s consider how the lessons of 2020 can make us and our organizations stronger. This focus on healing provides new opportunities to show the heart of business—one that performs better, cares more, and offers a new sense of hope for the future of capitalism.

Conscious Capitalism – Indianapolis’s “The Heart of Business” virtual series looks at the best of 2020 in preparation to make the most of 2021.

Conscious Capitalism co-founder and author kicks off our series with an enlightening presentation inspired by his latest book, The Healing Organization. Learn the history of the “profits over people” model of American capitalism and discover stories from across the world of businesses operating differently. These businesses are healing society’s ills by putting their stakeholders first—employees, customers, investors, communities, and the environment. The book provides valuable insights for creating a more enlightened world based on profitable businesses with sustainable and caring values. Learn how to create wealth without compromising values and start on the path of making a positive difference in the world.

The Old National Bank Center for Business Excellence at Butler University (ONB Center), which was established to connect privately held companies with the resources and support they need to succeed, will waive its annual membership fee of $1,000 for the first year for companies that meet the following criteria:

This initiative was born out of a conversation between Mark McFatridge, executive director for the ONB Center, and Butler student Victor Aguilar, an intern at the Center. Shortly after the death of George Floyd in Minneapolis, Aguilar approached McFatridge to ask whether the ONB Center would be issuing a public statement related to the situation. “It was simply a question to see if we were going to release anything official, and that sparked the development of this program,” explained Aguilar. “I never imagined this outcome.”

“It’s no surprise that this initiative was sparked by the social consciousness and passion of one of our Butler students,” said Butler President, James Danko. “Furthermore, I applaud the ONB Center’s executive director, Mark McFatridge, for his efforts to foster such student leaders as well as an innovative and socially responsible initiative such as this. Victor, Mark, Old National Bank, and our partners are among many throughout the University who are working diligently to live Butler’s mission both on our campus and in the community.”

Old National Chairman and CEO Jim Ryan said this initiative is a logical extension of the ongoing partnership between Old National and Butler. “This is absolutely the right thing to do to support Indiana’s underrepresented business owners and the clients they serve,” said Ryan. “We are incredibly proud to partner with Butler on this program.”

To ensure that the ONB Center can appropriately service the potential demand, the initiative will be rolled out in phases. However, demand from business owners may cause the Center to adjust these dates.

Upon registering for the initiative here, ONB Center member companies will receive the following:

The Old National Bank Center for Business Excellence is a partnership between Butler University and Old National Bank, two of Indiana’s longest standing and most respected institutions. The partnership was established to assist privately held companies in achieving their goals. This assistance is based on connecting member companies to resources necessary to achieve those goals.

While the ONB Center does not discriminate in who we serve, we have not placed the appropriate focus and attention on seeking out member companies owned or managed by the underrepresented populations that help make Indianapolis and the state of Indiana great.

Butler University and Old National Bank condemn racism and hold the fundamental belief that our respective services should be available to all—regardless of race, gender, religion, ability, or sexual orientation.

ABOUT BUTLER UNIVERSITY
Butler University is a nationally recognized comprehensive university encompassing six colleges: Arts, Business, Communication, Education, Liberal Arts & Sciences, and Pharmacy & Health Sciences. Approximately 4,600 undergraduate and 800 graduate students are enrolled at Butler, representing 45 states and 30 countries. More than 75 percent of Butler students will participate in some form of internship, and Butler students have had significant success after graduation, as demonstrated by the University’s 98 percent placement rate within six months of graduation. The University was recently listed as the No. 1 regional university in the Midwest, according to the U.S. News & World Report Best Colleges Rankings, in addition to being included in The Princeton Review’s annual “best colleges” guidebook.

Old National Bancorp (NASDAQ: ONB), the holding company of Old National Bank, is the largest bank holding company headquartered in Indiana. With $22.1 billion in assets, it ranks among the top 100 banking companies in the U.S. and has been recognized as a World’s Most Ethical Company by the Ethisphere Institute for nine consecutive years. Since its founding in Evansville in 1834, Old National Bank has focused on community banking by building long-term, highly valued partnerships and keeping our clients at the center of all we do. This is an approach to business that we call The ONB Way. Today, Old National’s footprint includes Indiana, Kentucky, Michigan, Wisconsin and Minnesota. In addition to providing extensive services in retail and commercial banking, Old National offers comprehensive wealth management, investment and capital market services. For more information and financial data, please visit Investor Relations at oldnational.com.